This is the Christmas card we sent this year to family and friends. Sorry to share this so far after the fact, I had intended to get it done much earlier. But, we were running late getting these in the mail, and I didn't take time to scan one before mailing them ALL! And I'm never excited to make another after having made 115 to mail! But, I finally took the time because I do like to keep one of them to look back at! 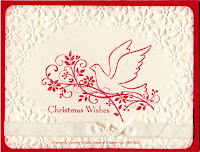 The card base is Real Red. The next layer is a Vanilla CS (Not SU!). It is a shimmery CS like the Shimmery White that SU! carries. I wanted the softer look of Vanilla. After cutting the background Vanilla to size, I ran it through the Bigshot with the Petals-a-Plenty Impressions Folder and the Wooden craft frame to leave the oval unembossed in the center. You can't see it in the scan, but I also sprayed the Vanilla (before doing any stamping!) with the Shimmery Spray mixed from 90% alcohol and the Champagne Mist Shimmer Paint. Gave it just a little more shimmer-you can't have too much right?? When doing that in large groups though-do it in a well ventilated area!! After that dried, I rounded the edges with the corner rounder. The main image was stamped with Real Red Craft ink and embossed with Iridescent Ice EP. Before stamping, I also added a dot of gold to the center of the 3 flowers using my Gold Encore reinker. Click on the picture above to enlarge if you can't see the detail. The edges of the Vanilla were sponged lightly with Real Red before I added a Very Vanilla taffeta ribbon. 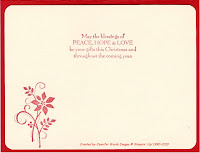 This is the inside of the card. I generally don't to alot inside my cards, but this evolved from an accident and I decided I liked it and did it on all of them. Let's just say it pays to have a sample handy of what you are creating and to stop and think before stamping the verse inside.

If you are looking for things to do today, here is a link to all the previous Christmas cards I've made. Well, all but one that I can't find a copy of!

Wow, what fun to look back at those! I can remember working on all of them and things that we were doing at the time. Have a great weekend all!!

Posted by Sunflower Stamper at 9:57 AM

Oh, I loved this trip down "memory lane"!! I'm the proud owner of several of those cards...and I love them! The very first year, stitched santa is adorable, too! What a cute image. It had to be fun, remembering all the cards you've done in the past 10 years! Thank you for sharing them with us! I love them all! :D