Wow, where has this month gone? Well, I know where mine went-baseball! But that is approaching the end and I'm sure I will miss it when it's done. Same with the catalog! June 30 is the LAST day for the current catalog! I just updated the Last Chance Accessories list with what has sold out. I moved that post up closer to the top, so just scroll down briefly. If you are a procrastinator, PLEASE let me know ASAP if you need to order. I have a club order going in tomorrow so if you're in the area we can add it to that! Or, click here & Shop Now!

Hope your summer is going well! Fast for sure here. And it was VERY hot & miserable this week. Today was better and I hope it stays a little cooler!

Remember to check the retiring sets (Click HERE) and make sure you didn't miss purchasing one you can't live without! Double check!!

Off to create club projects for tomorrow! Yes I am a procrastinator!!!
Posted by Sunflower Stamper at 9:58 PM No comments:

Here is a card I created for a swap that went in the mail yesterday. Lovin' this new color-Rich Razzleberry! Rich indeed!! 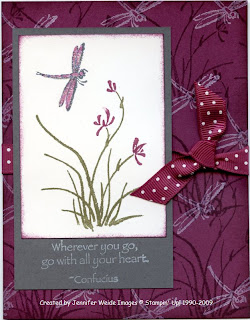 Thanks for stopping by-hope you're staying cool! It's miserably hot here!!

Posted by Sunflower Stamper at 10:00 AM 2 comments:

Another sketch completed (yeah me!!)-this one for Stamping 411's Saturday Sketch. For this one, I used a new set, Autumn Days, and some new In Colors! I'm liking them!! This card has the feel of fall, but could be used year round for a masculine card! 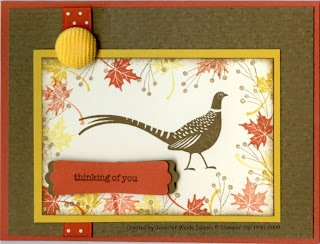 Card base is Dusty Durango, background is Soft Suede, Images on Whisper White. The layer behind the pheasant is Crushed Curry. See that ribbon?? The new In Color ribbon is grosgrain-with dots! Love it! More samples using the ribbons in the near future! The background is textured using the Big Shot and the Texturz Plates (Kit #4). I stamped the pheasant in Soft Suede, then stamped the leaves randomly around using Dusty Durango and Crushed Curry. I stamped some full strength, some off once. The other stem image was added last using stamped off Soft Suede. Sponge Soft Suede around the edge to finish it. The "thinking of you" is from the new set, Teeny Tiny Wishes. The new Modern Label Punch was used (twice) and layered on with dimensionals. The button is Summer Sun, but looked just fine with the Crushed Curry!
This is the set I will be using for the Royal Blog Tour on July 26-28. Mark your calendar! You won't want to miss ALL the great samples that will be shared! More details in my side bar.
Posted by Sunflower Stamper at 9:54 AM 7 comments:

I decided to do the Mojo Monday sketch of the week to get some mojo going! I haven't been stamping much, mostly because it's such a busy time of year for us. Between my 2 boys, we usually have baseball games 4 nights a week! Plus practice at least one other night or Saturday morning. Add in working, regular chores and keeping garden & landscape alive, there isn't any time left!
Summer has arrived with a vengeance too! It's over 95 degrees and VERY humid today! We have been getting some rain which is wonderful. We were way down for the year, so it's a little less now. Others in the area have gotten alot more, but there's been hail that we don't want! So, as long as we keep getting some, we'll be happy!! The humidity is good for the corn crop, so guess we have to like that too.

This card is sized to fit a #10 envelope. Card base is 9 x 7-1/2, folded to 9 x 3-3/4. Base is Baja Breeze. Background is the Parisian Breeze DSP. I decided to use up some retiring colors of paper before breaking into the new! Stamp set is Friends 24-7, new to me & NOT retiring. Color was added to the bird& branch with a blender pen. Saying is punched with the Key Tag punch (retiring!).

The current catalog is good only through June 30! Time is running out to get the items you NEED before they are gone! Scroll down a couple posts to check the retiring accessories, and click here to see the stamp sets that are retiring. Contact me if you need to place an order!
Mark your calendar for another blog tour-July 26-28! More details in my side bar!

Thanks for stopping by!!
Posted by Sunflower Stamper at 3:15 PM 2 comments:

WOW-I made a card!

Finally-I took some time to stamp the other evening! We had a rain out Tuesday, not because it rained here but it apparently had rained at our destination! So, I took advantage and did a couple projects I've been needing to do! This is actually one of 3 that I made, but the only one I have a picture of right now!
This is a CASE of a swap card created by Sharon House. The basic layout & stamping is the same as hers, but I used different colors of DSP. 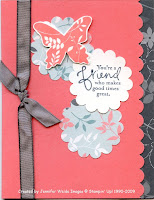 This was for a group of stampers that I met briefly with on Wednesday night. They get together regularly and asked me to stop by. (Hi ladies-it was great meeting all of you!) They all got to make this quick and easy card! Card base is Cameo Coral-a blast from the past!! We scallop punched the front edge of the card, and inserted on the back of the inside a 1" strip of the Basic Gray print DSP from the Walk in the Park set. We stamped the butterfly from Great Friend in Cameo Coral on Whisper White & cut it out. We punched two scallop circles of the Baha Breeze Print, also from the Walk in the Park DSP. The Whisper White CS scallop circle was also punched, then we added the saying in Basic Gray. We tied a ribbon around the entire card & knotted on the front. This one uses the Basic Gray Taffeta ribbon, but the Whisper White taffeta looks just as good, as would the White Satin ribbon from the Mini Catalog. Add your circles to your card front as desired and layer on your butterfly with a dimensional! Done!!
The Walk in the Park DSP & Great Friend sets are in the Mini Catalog! Get the items you need from there NOW as they are only available until June 30! Contact me if there is anything you need, or click here to go to my SU! site. Hit the Shop Now button and the top & shop away!
Posted by Sunflower Stamper at 10:50 PM 1 comment:

If you previously looked at either the stamp set or accessories lists, changes have been made.

The following sets have been removed and will be available on a dormant list during the 2009-2010 Idea Book & Catalog:

And, added to the accessories list are the following two items:

116209 Note of Thanks
116210 Birthdays Count
It was a nice, rainy day here today! It's been a LONG time since we could say that! Our baseball game got called last night, of course after driving an hour to get there and playing almost 2 innings. But tonight's was cancelled early this afternoon so we're enjoying a night off! One of several this week, but we have a tourney this weekend, so I guess it's a trade off!
I'm off to my room. Probably not to stamp, but hopefully to clean it up a bit so I can sometime soon!!! Thanks for stopping by!
Posted by Sunflower Stamper at 7:12 PM No comments:

Wow, it doesn't seem like it should be June already, or that we should be ending another catalog already!!! The good news is always that the NEW catalog is just around the corner, but first we have to say goodbye to some sets & acccessories! Oh, and Decor elements this time too!
I have posted the Last Chance Accessories in a previous post (click here), make sure you check it often as they are WHILE SUPPLIES LAST! Already several things are gone!!
The stamp set & Decor elements lists can be found by clicking the links below:

June is an excellent time to hostess a workshop and SU! is giving a little extra incentive this year! Hostesses with workshop totals between $250 & $400 get an extra $20 in FREE merchandise. Hostess with $400 or more, get an extra $40 FREE! COOL! Contact me today to schedule yours!!
We are headed out soon for baseball, and boy does it feel like summer here today! Very hot and humid, and the weather service just announced a thunderstorm watch! That's more like it! We desperately need rain here and while it's been nice going to baseball without dodging weather, we'll take the storms as long as they bring rain without too much severe activity!

ETA: If by chance the above link are NOT working for you, please try clicking here & going to the Promotions page on my SU! Site. There should be a link there for each of the lists!
10:15 pm 6/5/09
Posted by Sunflower Stamper at 3:27 PM No comments: