This is not stamping related, well maybe a little. I was on my way to a stamping evening with a group of ladies. I've never had a problem before with Friday the 13th, and have always told everybody it wasn't so bad. My husband and I met on a Friday the 13th, many years back. But now, I'm not sure I'll be so positive! Here is why. 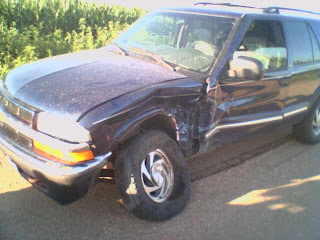 The good news is that I'm OK, just a little stiff and bruised, and so is the young man who hit me. I live in a rural area and was taking a back road to another town. All four corners of the intersection have corn growing on them, probably 7 to 8 feet tall, so neither of us could see the other coming. You can bet I'll be slowing down in the future before entering ANY intersection! This picture was after the tow truck pulled the blazer out of the ditch. We went by the lot where it's sitting today and it really looks bad. We're guessing it's totaled, but we'll see what State Farm says.

I'm taking it easy today and hope to get some stamping done. I did have supplies in the back of the blazer that got tossed around pretty good. I had catalogs back there too which are rather heavy in their boxes, so that probably contributed to the damage of a couple other things. All in all though, I'm just glad to be OK! Sad to see the blazer go, but we had been shopping anyway to replace it. I'll probably be getting a new Buick a little sooner than originally planned.
Posted by Sunflower Stamper at 1:32 PM

Email ThisBlogThis!Share to TwitterShare to FacebookShare to Pinterest
Labels: Misc

wow that must have been scary! DO relax and have an extra helping of Calcium and Magnesium for your muscles, the impact most likely pushed everything out ;) A round of glucosamine will most likely prevent late soreness. I HATE accidents!!!
Glad you are all ok though, could have been a lot more unlucky. Can you ask the town to mow down the corners of the fields so visibility is enhanced for the xing?

I am soooooo glad you are OK! I get cold chills when I think how close to your door that hit was...yikes! I think you were LUCKY on Friday the 13th, that the hit wasn't directly where you were sitting! You know??!! It's a good day for stamping, and just resting your bones...take care!!