Every year at NEMC there is some sort of game show. This year was no exception and the title was Lucky 7. We had a general Pirate Theme for the whole event and we started off trying to earn a final spot in the show by collecting 7 tokens. We got 1 for checking in, 1 if we presented, etc. Saturday morning we had a SU! trivia competition to see who the final 14 would be. I collected 7, thanks to a giving friend! The finals found us all being given pirate attire in the form of a bandanna, gold earring, necklace & eye patch. I cropped out my fellow pirates, but there were 14 of us who looked like this, so it wasn't too embarrassing!

We were also given a "treasure" sign to wear around our neck. We were all lined up and given a random small treasure chest. We were divided into two groups by what was in our chest, either a Lemon Head (candy) or a pirate head (skull).

Here is the Pirate Head group awaiting our next instruction. A simple elimination round eliminated the other group, and we were the finalists! Each of us was given a key. One key unlocked the grand prize treasure chest.

While I wasn't the winner, and didn't even get to try my key (I was last in line), the lucky winner won a Big Shot. She didn't already have one so it worked out well! All of my team got a very nice gift (all different) of current items from the SU!catalog.
Finally, a shot of myself and customers JoAnn & Sharon who accompanied me for the weekend. A GREAT time was had by all! 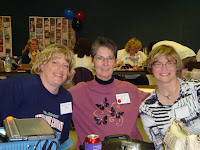 Posted by Sunflower Stamper at 9:32 PM